If you’re taking your driving test soon then you are bound to be a little worried, but don’t worry, as we are here to help calm your nerves!

First of all, it’s important to know that you cannot accrue more than 15 driver faults during your test – which are otherwise known as minors. If you obtain a single serious or dangerous fault, otherwise known as a major, then you will fail the test.

During the test, you will be asked to complete two show me/tell me questions, one manoeuvre and possibly a controlled (emergency) stop.

What is included in the driving test?

Before the driving test can begin, an eyesight test will be required, which will involve reading a number plate at 20 metres in the test centre car park. Plus, two of the show me tell me questions.

The driving test will last around 40 minutes and where possible, includes various types of road and traffic conditions. It will also include one of the following four manoeuvres:

One in four people will also get tested on an emergency stop. The driving test will also include 20 minutes of independent driving, normally using a SAT NAV, but one in five will be asked to use road signs instead.

How will the driving test be marked?

This form is used for various DVSA driving tests, so some of the form won’t be relevant to your test. These days it is more common for the examiner to do the marking on a tablet rather than the paper form, but it is still the same thing. 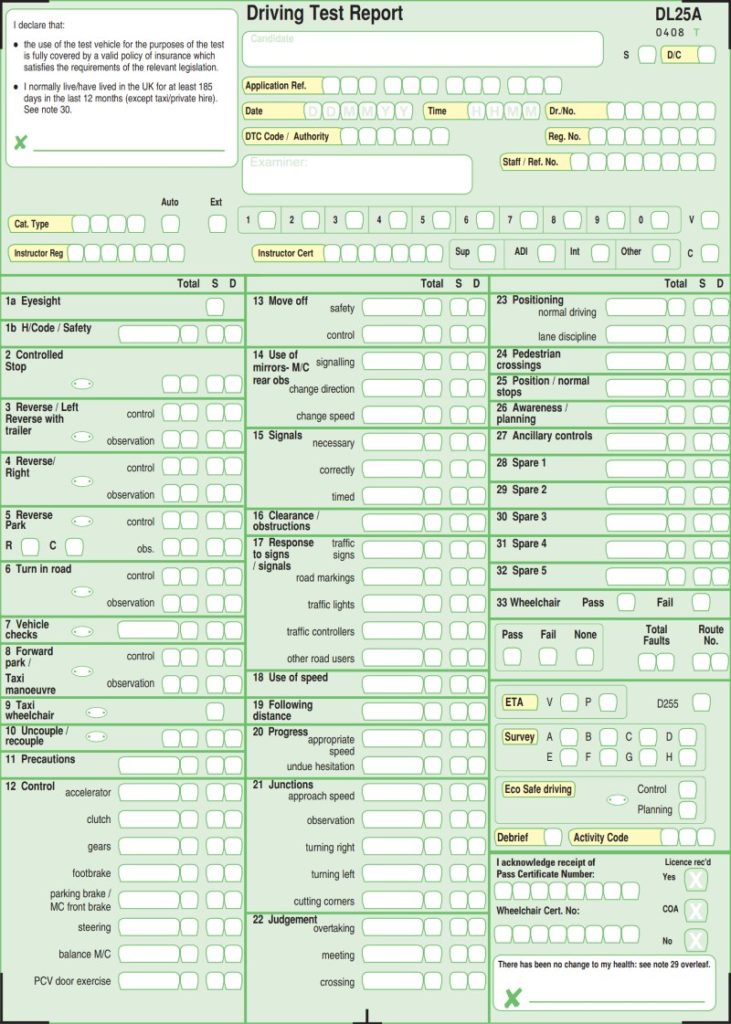 Every time you make a fault, the examiner will find the relevant competencies and tick the most appropriate column; Driver fault, Serious or Dangerous. You are allowed a total of no more than 15 driver faults and no serious or dangerous faults in order to pass the test.

Driver faults are considered low risk and are faults that do not compromise safety. For example, stalling the car when there is nobody around and no other road users are affected. This would be considered a driver fault.

A serious fault occurs when there is a danger to safety, control of the car or a legal requirement. For example, not taking effective observation at a junction when there was the possibility of a car to give way to, which could be considered to be a serious fault.

A dangerous fault occurs when there has been actual danger due to lack of safety, control or failure of a legal requirement. For example, no observations were taken at the junction and the examiner has had to intervene to avoid an accident.

The most obvious part of the driving test mark sheet (but the most consequential!) is that the examiner will mark off on the sheet whether you have passed or failed your test. If you pass, you will receive a pass certificate and will also need to sign a declaration to confirm that there has been no change in your health status since you last applied for a licence.

Get in touch with Nayland Driving School today

The best way to approach a driving test is to feel calm and prepared – so check out our tips on how to stay calm before your driving test. For more information on driving tests and what to expect, please don’t hesitate to get in touch with the Nayland Driving School team today.

I was taught by Geoff for about 2 months and I went to my test and passed the first time with this company and I would highly recommend Geoff and the company ad he teaches really well, he ensures that you end up being a driver and not a learner and i felt that is a really respectable quality when it comes to a teacher. I could not say any bad experience and was extremely happy

For any one wanting to learn to drive but not sure who to go with I definitely recommend Nayland, with his great help I passed first time and in just over three months, the lessons were great I always looked forward to them as Michael is a lovely guy and very down to earth, and up for a laugh 🙂 but he is also very patient for any one who is nervous about driving. 🙂

Thanks a lot to Dave, very calm and professional instructor. Passed after 20h, would definitely recommend.

I passed my test first time, I didn’t need to use any other instructor as Michael gave me all the advice I needed, down to earth, practical and easy to understand. While learning to drive can be stressful, Micheal made it so easy for me. I enjoyed learning and looked forward to the lessons as they were really enjoyable, if you want to learn to drive with someone that will make it enjoyable and practical Micheal is the guy! guy.

Before having Michael as a driving instructor I was with someone else! I was given his number through a recommendation, and his lessons gave me the confidence to pass my test! Michael has great prices and deals, to suit anyone! I have now been driving a year, and I have recommended many people to go with him and they have gone on to pass very fast! 🙂

Massive thanks to Suzanne! Amazing instructor! Helped to boost my confidence and pass my test quickly! Highly recommend!